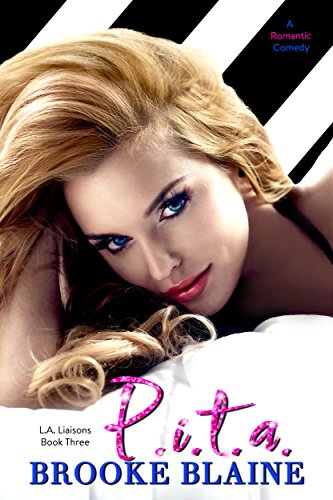 As one of the most prestigious wedding coordinators in Los Angeles, Paige Iris Traynor-Ashcroft is known for being classy, elegant, and the orchestrator of many happily-ever-afters.

But in the words of Paige herself: “What a crock of shiitake.”

Known affectionately (or not) as P.I.T.A. to those closest to her, she’s never been one to buy into the whole monogamy thing for herself. Sure, her BFFs are getting picked off by Cupid one by one, but his arrows have nothing on her semiautomatic.

Richard “Dick” Dawson does his best to live up to his name. A long-time frenemy and manwhore extraordinaire, he thrives on pushing limits, pushing up skirts—and pushing every single one of Paige’s buttons. He’s the itch she can’t scratch, and doesn’t want to. Or does she?

What happens when blazing-hot rage turns to crazy, unexplainable lust? Surely not…love? Because that would just be a total P.I.T.A.

P.I.T.A . is a standalone within a series. All books in the L.A. Liaisons series can be read independently of each other and in mixed order. For maximum reading pleasure, the published order is: LICKED, HOOKER, P.I.T.A.